This message is from Ark Media:

Ark Media is seeking African American families from Prince George’s County, Maryland for a story about the Black Middle Class, as part of a four-hour PBS documentary series.

This series -- tentatively entitled FROM BLACK POWER TO THE WHITE HOUSE — takes viewers on a journey through the last half-century of African American history, exploring the unprecedented progress and lingering obstacles to racial equality since the landmark legislative victories of the civil rights movement. The series will be hosted and executive produced by Professor Henry Louis Gates, Jr., and will air on national PBS in 2016.

We are looking to interview a family from Prince George’s County as part of a discussion about the growth of the African American middle class.

We would love to speak to you if you or your family:

·      Identify as middle or upper middle class and African American

We’re interested in the factors that drew you to your current neighborhood, your experiences living there, and the changes your neighborhood has undergone since your arrival.

Please feel free to forward this message to your contacts. Please reach out to Eu-Hua Chua, Associate Producer at e.chua@ark-media.net or (718) 935-9745 ext 107.

I see from my statistics that people are searching on election and voting issues. Since early elections are over,  I haven't had time to post much recently, but this is very important. EVERY GOOD CITIZEN SHOULD VOTE! Let's do our best to keep it democratic with the right to be an informed voter.

Here is some useful information about the election:

Ballots:
Ballots from Your Prince George's County Poll and how to look up which polling place is yours - click on number link under either English or Spanish

Maryland ballot questions can be puzzling

Central Democratic Committee reverses decision regarding Board of Education endorsements

When it's done (late Tues., Nov. 4 or early Wed., Nov. 5),  you can FIND RESULTS here for the state of Maryland. Check the Facebook page for Prince George's County Elections for updates on the county election.
Note: Sometimes they have a recount or wait to count absentee and provisional ballots, so final results could extend for days or even weeks past Nov. 4, 2014. 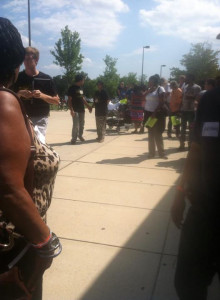 Many people throughout the U.S. have no dental insurance. If you can't afford to pay for insurance, there's a very good chance you can't afford dental care. Infections in your mouth can affect vital organs and your overall health. This dental health ministry is a life-saver for hundreds each time it is held.

Among the preregistered people (about 250 of them), they were still taken on a first-come-first-serve basis. Some people were waiting before 1PM. They started to take people in the building at 2 PM today, but they predicted that the last ones would be there until 6 PM, though I don't know how because they were only calling #88 at 4:45 when it had been about an hour since they called #44 & she had not been finished yet. There were many people still waiting to be seen at 5:00. All would have to come back tomorrow & again wait on line. 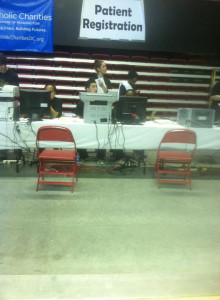 ple came with children and were told at the last minute that the children could not come in. I don't know if that information was available earlier, but it didn't seem to be known or believed by the mostly mothers who came with infants & toddlers, though they did offer to let them back in if they found a supervised place for their children to go.

Tomorrow people who were not preregistered & available to come today will be standing on a long line. They have to get there before 7 AM & may not be finished until 6 PM. Then they may have to come back Sat. morning.

Dentist, hygienists, specialists & a lot more helping out are all volunteers at this 3-day event.

Now through August 1, Prince George’s County Public Schools (PGCPS) will provide free and nutritious breakfast and lunch for all children ages 18 and under at specific sites throughout the summer. “Providing continuous meals throughout the summer helps children receive the nutrition they need to learn, play and grow,” said Dr. Kevin M. Maxwell, Chief Executive Officer for Prince George’s County Public Schools. The program will serve breakfast from 8:30-9 a.m. and lunch from 11a.m.-12:30 p.m. School sites are:

Homes with gas service, an attached garage or fire place must have detectors starting July 1.
BY LYNH BUI June 26
After an unusually cold April night two years ago, Prince George’s County firefighters were called to an Oxon Hill home. There, they found five people, all dead. But there were no signs of forced entry and no visible injuries on the bodies.

Authorities later discovered that everyone in the house had died of carbon monoxide poisoning. An exhaust pipe from the furnace broke overnight, leaking gas into the home and slowly poisoning them as they slept.

“That family never woke up,” County Fire Chief Marc Bashoor said. “They had no alarm. Nothing to warn them.”

Since then, four more people in Prince George’s have died of carbon monoxide poisoning. But officials hope a law that goes into effect July 1 will prevent similar tragedies.

Starting next week, all houses in the county with gas service, an attached garage or a fireplace must have a carbon monoxide detector on every level.

The gas is “colorless and odorless,” Bashoor said. “You don’t know it’s there until it’s too late.”

Prince George’s is one of the first counties in Maryland to require carbon monoxide detectors in homes, Bashoor said. The detectors cost at least $20, and the fire department recommends 10-year alarms that don’t require frequent battery changes.

Bashoor said he understands that some homeowners may be reluctant to spend the money, but the small investment could save a family. “It’s probably the cheapest insurance policy you’re going to find,” he said.

Although there is a civil penalty for violating the legislation — a $100 fine — the department will probably be generous with warnings, officials said. The fire department plans to “passively enforce” the law, fire department spokesman Mark Brady said. County officials won’t be going door-to-door to check whether alarms have been installed.

“We’ll try to help you get an alarm as opposed to giving you a ticket,” Brady said.

Summit at the Prince George’s Ballroom on June 24, 2014. The summit will feature a viewing of the 2012 Sundance Film Selection, Luv starring Common and Michael Rainey Jr., a coming-of-age story about an impressionable boy who gets a crash course in what it means to be a man after spending the day with his ex-convict uncle he idolizes. Participants will then get an opportunity to discuss the film in an open dialog moderated by actor and musician Anwan ‘Big G’ Glover from the HBO series, The Wire, and 12 Years a Slave. Anwan is also known for his long-time role as lead vocalist for the Washington, DC Go-Go Band, “The Backyard Band.”

The purpose of the Youth Empowerment Summit is to help youth make the right choices for a positive future. Exercises in conflict resolution and mediation awareness will be conducted by The Key Bridge Foundation, a conflict management provider that uses resolution strategies to encourage cooperation and problem solving for individuals and organizations.

Registration is required. Call 301-265-8446 to register. Due to the R rating of the film, Prince George’s County youth ages 13-17 must have signed parental consent. Breakfast and lunch will be provided.

“Public safety, a shared priority, is an issue that directly impacts every Prince Georgian. We want to update residents on our historic progress in public safety and discuss ways we can continue to work collaboratively to keep our communities even safer. This is an important opportunity to review our successes, identify our challenges, and develop strategies for our future, and I would encourage all of our residents to lend their voice to the conversation. “

This event is free and open to the public. Live streaming will also be available on July 1 beginning at 7:00 p.m. at http://townhall.mypgc.us. Twitter users can live tweet their questions and concerns @PGCCouncilMedia.

Voting in the primary is where major decisions about who leads our governments and makes our laws.
NOTE: Some "sample ballots" are not real ballots, but are tools for parties to solicit your vote. For the actual ballots, see below.


How to know who's on the ballot:
See https://voterservices.elections.maryland.gov/VoterSearch and put in your voter information if you are registered. If you're not already registered, you cannot vote in the primary. Deadline to register for the general election is 10/14/2014.
NOTE: If you are a registered Republican or Democrat, you can still vote for nonpartisan candidates, such as Board of Education. More about the school board election in Prince George's County is here.

More information about candidates, including their web site addresses to compare according to what they actually say.

Love this! It represents how I feel living here!

Did you know June 3rd is the last day to register to vote in the June 24th primary? Let your friends, families, and neighbors know to register by next Tuesday, June 3rd in order to participate in the primary. The primary is of utmost importance in the state of Maryland and Prince George's County, because that's where we help choose who will be on the ticket in the general election.

A Comprehensive Inside View of How our School System is Governed

WHO SHOULD ATTEND?  School Board Candidates, Campaign Staff, Activists, Civic Leaders, Government Officials, Other Residents who care about how our school system is governed and the challenges we face in educating our children

For more information, please email ElectedBoard@aol.com or telephone Co-Chairs Janis Hagey, 301-464-0171, or Dave Cahn, 301-627-5126
Presented by Citizens for an Elected Board
Collapse